Trying Vue as a React Developer: A Quick Introduction 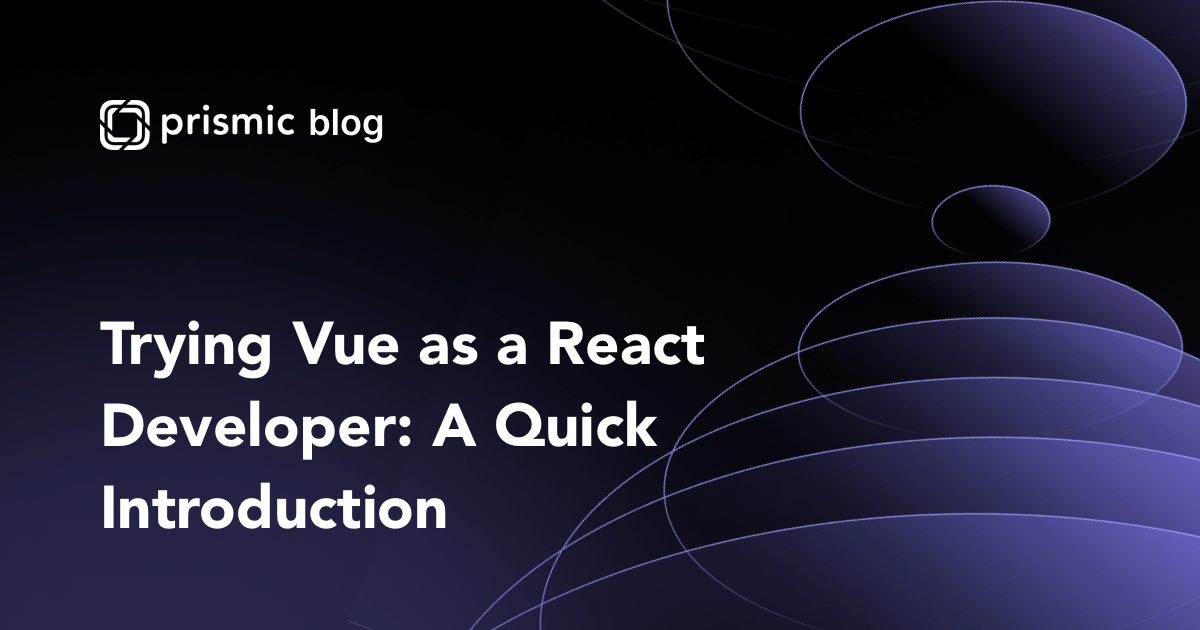 However, there has been a steady increase in the usage of Vue instead of React. It has developed its own ecosystem completely separate from React over the years including build tools, meta-frameworks, routers, state managers (like Pinia), component libraries, and more. But what is the reasoning behind this increase in Vue usage? There are many reasons that developers may choose one over the other.

Some developers prefer supporting a community-run project over a project managed by a large corporation. Others find React too complex in comparison to Vue. Some developers also find the separation of content, styling, and logic in a Vue single file component to be more intuitive than the separation of concerns within a JSX file. In this article, we will compare a Vue project to equivalents in React so you can decide for yourself which you find more intuitive.

Jump to a section:

A history of Vue

Evan You created Vue in 2014, taking inspiration from AngularJS and React, which were sponsored by Google and Facebook respectively. Unlike those frameworks, though, Evan was the primary driving force behind the creation and development of the framework. This allowed him to take on different influences from a framework like React, for example, where development has been highly intertwined with the needs of Facebook.

However, when it comes to the syntax, we’ll start to see key differences. Vue’s syntax and directives are influenced by AngularJS and include common operations such as for loops (v-for), conditionals (v-else-if), and event handling (v-on). The underlying implementation uses a virtual DOM like React for quickly reconciling DOM manipulations with a declarative syntax.

React, on the other hand, uses JSX so the developer can write for loops, conditionals, and event handlers the usual way with JavaScript. This results in a file containing JavaScript functions at the top and a return function at the bottom. The return function outputs HTML containing any JavaScript variables defined above the function.

This example does not include any CSS, although it is possible to include CSS in a React component with a library like Styled Components or Emotion.

However, unlike React with JSX, Vue breaks up a single file component into three clearly delineated parts: script, template, and style.

This roughly corresponds to the three languages used to build all websites: JavaScript, HTML, and CSS. If we were to view this component in a web browser, it would look like the following:

Now that we’ve talked a little bit about the similarities and differences between React and Vue, let’s look at a small Vue project and how it would compare to a React project. To tour the Vue project with me, spin up a Stackblitz by clicking here.

Of course this Vue project requires slightly different dependencies from what you’d see in React, which you can see in the package.json file. You’ll see vue as a project dependency and two development dependencies: vite and @vitejs/plugin-vue.

If this were a React project, you would see react and react-dom.

For the project files, you’ll see an HTML entry point file, a main function, application entry point, HelloWorld component, and configuration files for Vite. Notice these files in the root of your project directory:

There will also be two files in the src folder (along with two folders):

And finally a single file in the components folder:

Since Vite supports multiple front-end frameworks including React, the code below in the vite.config.js file in the root directory tells Vite that you are developing a Vue project specifically.

Like React, Vue also uses an entry HTML file with a div that loads your entire application at once, which you can see in the code below, found in index.html.

If this was a React app, the only difference would be replacing /src/main.js with /src/main.jsx in the script tag.

As we saw previously, inside the body tags of our HTML entry file we load main.js as a script using the type attribute to load a JavaScript module. Our main.js file is located in our src folder.

This file is only used to import createApp from the vue library and our App from App.vue, also contained in the src directory. Here is the equivalent file in a React application for comparison:

createRoot from ReactDOM is used to set the application to root with getElementById. The App is then rendered as a self-closing tag.

As we saw earlier, a single file component in Vue contains a script for any JavaScript code, a template for HTML content, and styling for CSS.

The equivalent React component would import HelloWorld and then declare an App function that returns the HelloWorld component.

Within these components, the organization of concerns shows one of the major contrasts between React and Vue.

Our App.vue file is importing the HelloWorld component from HelloWorld.vue. This file is located inside the components folder.

Many React developers are aware of “React meta-frameworks” such as Next.js, Gatsby, or RedwoodJS. Vue has similar meta-frameworks including Nuxt.js and Gridsome. Nuxt.js is heavily inspired by Next.js and includes the majority of the same features including SSR, API routes, serverless function integration, and third-party modules.

These frameworks provide additional features such as static site generation, server-side rendering, and authentication. Some of the requirements that would lead a developer to use a meta-framework include SEO optimization, internationalization, localization, or user management and authentication.

Despite the differences between the frameworks, a React developer should not have too much trouble picking up a Vue project. It still uses components that include a mixture of JavaScript, CSS, and HTML. However, Vue includes a more concise syntax and a cleaner separation between content, styling, and logic. The build tooling for both development and the production pipeline is nearly identical, especially now as Vite becomes more popular for React projects.

The Vue ecosystem offers higher-level frameworks for building faster and more reliably on real-world applications. Vue does not have as many third-party libraries as React, but there are still options for most of the tools that a React developer would expect including state management, UI libraries, and reusable components. Overall, with a little bit of research and practice, a React developer should feel confident performing just as efficiently with a Vue project as they do on a React project.